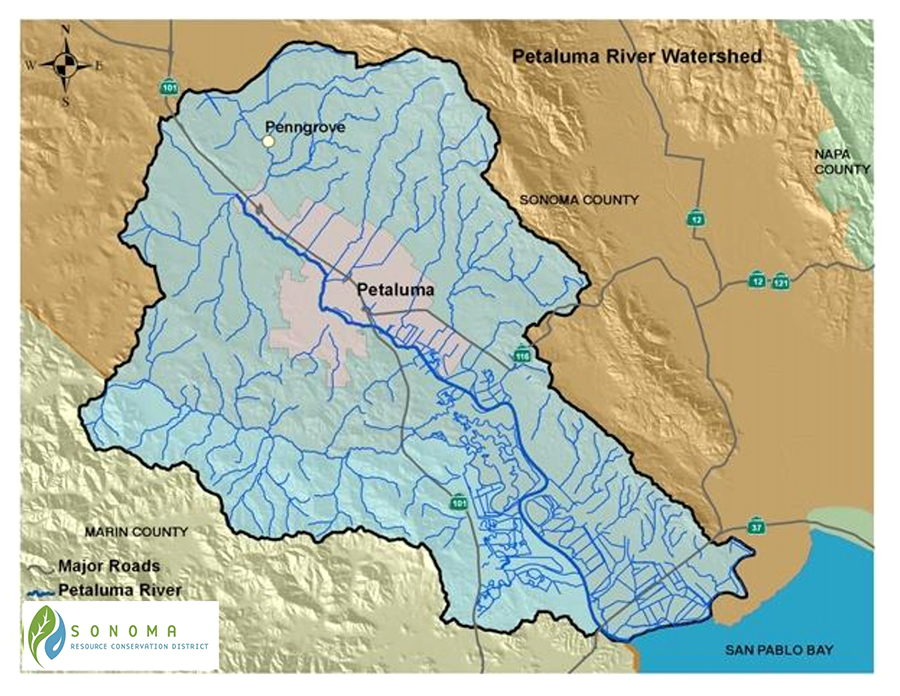 Located in southern Sonoma County, and a portion of northeastern Marin County, the Petaluma River Watershed encompasses a 146 square mile, pear-shaped basin. The watershed is approximately 19 miles long and 13 miles wide with the City of Petaluma near its center.

The headwaters and ephemeral tributaries of Petaluma River begin on the steep southwest slopes of Sonoma Mountain, the southern slopes of Mecham Hill, and the eastern slopes of Weigand’s Hill and Mt. Burdell. The confluence of Willow Brook, Liberty Creek, and Weigand’s Creek form the headwaters of the Petaluma Watershed just upstream of Rainsville Road and Stony Point Road. The Petaluma River itself flows across the Denman Flat area and through the City of Petaluma. Tidal influence extends upstream of the confluence with Lynch Creek (beyond the railroad crossing). A number of tributaries flow into the Petaluma River, the largest of which include: Lichau, Lynch, Washington Adobe and San Antonio Creeks. .

Petaluma Watershed is diverse and includes the City of Petaluma as well as vital rural and agricultural lands. Mountainous or hilly upland areas comprise 56% of the watershed. Thirty-three percent of the watershed is valley, and the lower 11% are salt marshes. Sonoma Mountain at 2,295 feet is the highest point in the watershed. The Petaluma River empties into the northwest portion of San Pablo Bay.
The lower 12 miles of the Petaluma River flow through the Petaluma Marsh, the largest remaining salt marsh in San Pablo Bay. The marsh covers 5,000 acres and is surrounded by approximately 7,000 acres of reclaimed wetlands. Prior to reclamation, marshland elevations ranged from mean sea level to 3 feet above mean sea level.

The landscape within the Petaluma Watershed encompasses an area of great plant diversity and maintains a series of valuable biological characteristics. The complex network of tributaries feeding the Petaluma River and the slough itself play a significant role in maintaining the ecological systems of the region. Terrestrial vegetation types and riparian communities constitute an area of tremendous biodiversity, which provides habitat for a number of species. These vegetation types include varieties found in urban and agricultural areas, grasslands and oak savannahs, wetlands, vernal pools, riparian corridors, and both salt and brackish water marshlands.

Funded by the Bureau of Reclamation’s WaterSMART program, Sonoma RCD is leading efforts in order to build the institutional capacity amongst local stakeholder groups to carry our sustainable watershed management and restoration in the Petaluma watershed by creating and sustaining a Petaluma River Watershed Collaborative. While funded under the current grant, Sonoma RCD will organize and hold stakeholder meetings in order to develop a revised version of the Draft Petaluma Watershed Enhancement Plan and an Action Plan to identify and advance watershed restoration projects and priorities.

Local landowners, residents, business owners, or individuals with interest are welcome to attend stakeholder meetings, as well as any additional watershed stakeholder that may have not been included within previous invitations. Meetings are held every other month in Petaluma.

Several interested party meetings geared to provide an overview of efforts, current information, and receive comments from interested parties will be held as well. Meeting agendas and notes will be posted below to notify of meeting date, time, and location.

Mission, Vision, and Goals of the Petaluma Watershed Collaborative

Governance of the Petaluma Watershed Collaborative

For more information about the Petaluma Watershed please contact Katie Robbins at 707.569.1448 ext 104 or krobbins@sonomarcd.org.