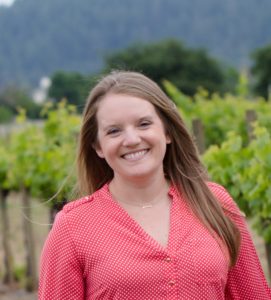 The Sonoma Resource Conservation District is pleased to announce that Valerie Minton has been named Executive Director. With almost a decade of experience at the RCD, and an exceptional record of community and public service, Valerie is well-positioned to lead the RCD into the future.

As an active member of Sonoma County’s community, Valerie’s recent involvement includes serving as Vice Chair of the North Coast Regional Water Quality Control Board, serving on the Regional Climate Protection Authority’s Climate Action Advisory Committee, and previously the Climate Action 2020 Stakeholder Advisory Group. Having also held various leadership positions with the Junior League of Napa-Sonoma, she works to develop the potential of women to serve the community’s most vulnerable populations. Valerie is a member of Leadership Santa Rosa Class 30, and a fellow of the Leadership for a Sustainable Future program, class of 2008.

Recently Valerie took on the role of Acting Executive Director and prior to that had served as the RCD’s Program Director. In that role, she oversaw staff in the LandSmart® Plans, On-the-Ground, and Water Resources programs. Valerie was integral in the launch of the award-winning LandSmart program several years ago, and she has brought in millions of dollars in program funding to support the RCD’s mission. In her 9+ years at the RCD, Valerie has worked in every program area, and has also played a leadership role in operations, finance, development, and partnership building.

Valerie succeeds Kara Heckert, who served as the RCD’s Executive Director from 2006 until last month. The Board of Directors conducted a search beginning in May which generated over 20 applicants. “After a thorough interview process with a number of highly qualified candidates, the Board unanimously selected Valerie as the RCD’s next Executive Director. Her experience, knowledge of the organization, and vision for the future made her the ideal choice,” said Walt Ryan, Board Chairman. “The response we received from so many capable applicants reflects the interest that many people have in the RCD’s important work.”

“I am honored to take the helm of an organization whose mission I believe in so deeply,” said Valerie, upon accepting the position. “I am grateful for the trust that the Board and staff have placed in me and look forward to my future work with this amazing team. Continuing to improve and expand our programs, to listen to the community and strive for excellence, will enable us to play an integral role in solving our County’s most pressing natural resource issues.”