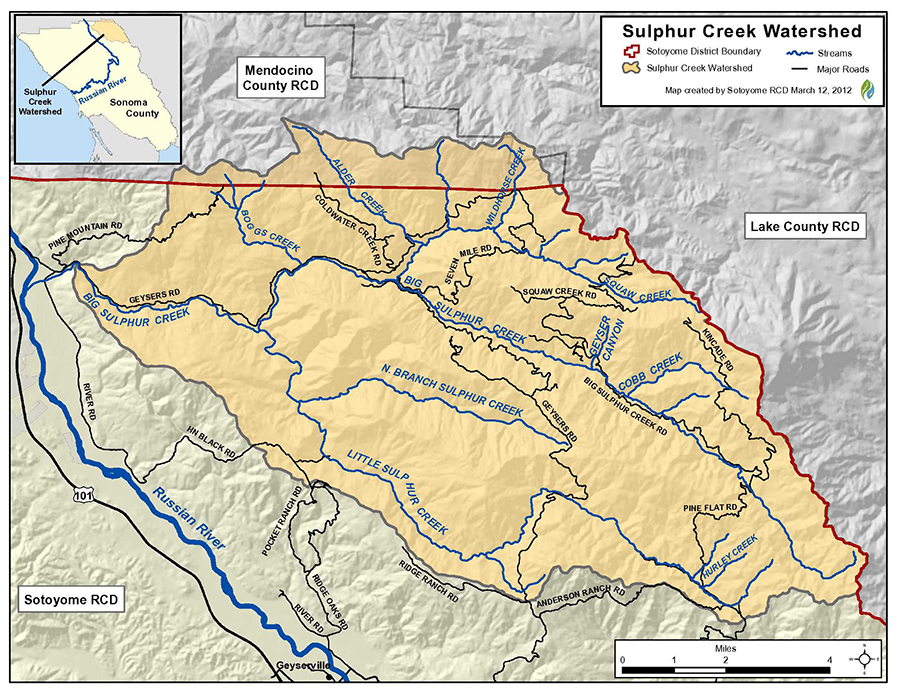 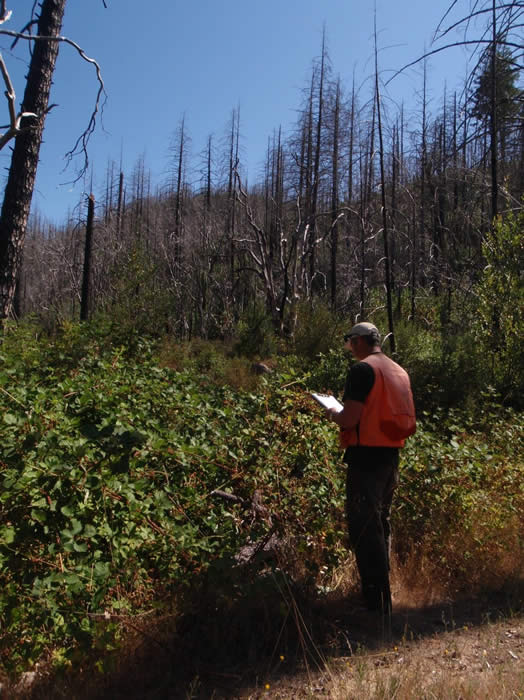 The Sulphur Creek Watershed is most well known for being the home of The Geysers and Hot Springs in Sonoma County.  This is a very important area for alternative (geothermal) energy generation. The Geysers power plants are also integrated into the Santa Rosa’s Waste Water Treatment System.  The Santa Rosa Geysers Recharge Project  transports 11 million gallons of treated recycled water per day to The Geysers through a 41-mile underground pipeline. Water is then recycled back into the ground, heated, and used as steam to power the plants.

Big Sulphur Creek and its tributaries drain a basin of approximately 85.43 square miles. Big Sulphur Creek is a fifth order stream and has approximately 22.34 miles of blue line stream. Major tributaries include Hale, Frasier, Little Sulphur, Hot Springs, Cobb and Carpenter Creeks. Summer flow was measured as approximately 2.03 cfs at 40′ upstream of the River Road bridge (DFG 2000). Elevations range from about 299 feet at the mouth of the creek to 4,498 feet in the headwaters. The creek originates in the northwest slope of Pine Mountain and runs down a narrow and steep “V”-shaped canyon, occasionally opening into shallow valleys. The lower basin is wide and shallow.  (From DFG Stream Inventory Report)

The watershed is owned primarily privately owned by Calpine Corporation and is managed for geothermal power production.  Calpine, the largest geothermal power producer in the U.S., owns and operates 15 power plants at The Geysers with a net generating capacity of about 725 megawatts of electricity – enough to power 725,000 homes, or a city the size of San Francisco.

For more information, go to: geysers.com/history

Oak woodland dominates the Sulphur Creek watershed followed by shrubland. Riparian vegetation is limited along the mainstem of Big Sulphur Creek, but especially in the lower reaches.

Big Sulphur Creek has historically had a large run of steelhead trout, but numbers drastically declined in the mid-twentieth century. (From 2000 DFG Steam Inventory Report). Yellow-Legged Frog and Pacific Giant Salamander are also species of concern found in the Sulphur Creek watershed.

Links to important programs/websites in the watershed: