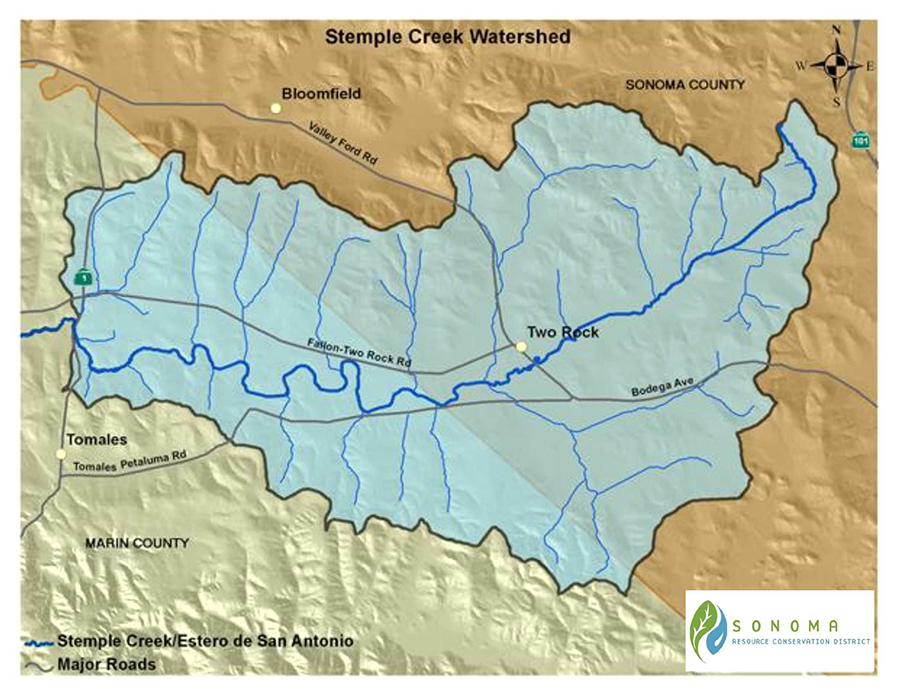 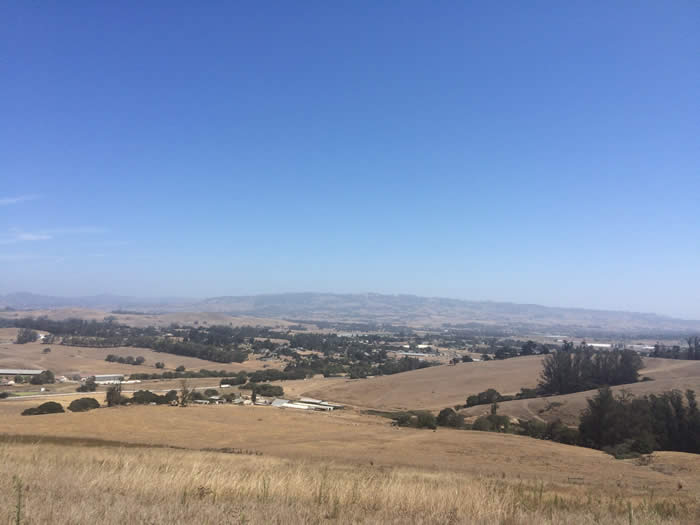 The Stemple Creek watershed is a sub-watershed of the Bodega Bay watershed, in Marin and Sonoma Counties. It lies approximately 40 miles northwest of San Francisco. Nearby cities include Petaluma, Cotati, and Rohnert Park, all within 5 miles of the eastern end of the watershed, and Santa Rosa, about 10 miles north. The watershed’s area is about 32,980 acres, or 51.5 square miles. Its east-west length is about 14 miles and its north-south dimension ranges from 3 to 6 miles. State Highway 1 crosses the watershed about 4 miles east of its outlet.

Stemple Creek flows westward through the watershed to its estuary, the Estero de San Antonio. The Estero empties into Bodega Bay, a broad indentation in the Pacific Coast. The Estero is an important coastal resource and is included in the Gulf of the Farallones National Marine Sanctuary.

The watershed is characterized by rolling coastal hills, most with slopes of 30 percent or less. Slopes are generally steeper in the western part of the watershed. The hills flanking the creek’s valley on the north and south are higher than those across its eastern end. Elevations range from sea level at the mouth of the Estero, to about 300 feet at the eastern end of the watershed, 700 feet along the northern boundary, and 850 feet along the southern boundary.

From the beginning of European settlement to the mid 1900s, the watershed has been farmed with small livestock herds and large areas of land cultivated for barley, wheat, vegetables, and potatoes.  Poultry and egg production was an important part of the local economy from the 1930s through World War II.

In 1990, Stemple Creek was listed on the federal Environmental Protection Agency’s 303(d) list as an impaired waterbody due to excessive nutrients and sediment.

In 1997, the North Coast Regional Water Quality Control Board adopted a Total Maximum Daily Load (TMDL) and Attainment Strategy for nutrients and sediment in the.  The TMDL has been adopted into the Basin Plan for the North Coast.

The RCD’s 1994 Enhancement Plan for the watershed indicates that over 80% of the accelerated erosion in the watershed comes from the lower watershed with large gully systems as the primary source.  Gully stabilization projects have been implemented by local landowners with support from the RCDs and the Natural Resource Conservation Service.

The land draining into Stemple Creek is largely grassland.  Willows have been re-established along parts of the mainstem and tributary streams; coastal oak woodland can still be found along some of the higher tributaries.  Eucalyptus, planted in rows for windbreaks and fuel, is now one of the most common trees.

Stemple Creek was once a marginal Coho salmon and steelhead trout stream. Farm ponds, especially those with shallow edges, now provide some of the best remaining habitat for waterfowl, northwestern pond turtles, and other aquatic species.

The RCD was awarded funding in 2012 through a partnership with multiple north coast RCD’s, the UC Cooperative Extension, and the Western United Dairymen to assist North Coast dairies with compliance with the upcoming North Coast Dairy Waiver.

In 1994, the Sonoma RCD and the Marin RCD completed an Enhancement Plan for the Stemple Creek/Estero de San Antonio watershed. The goals of this plan include:

For more information about the Stemple Creek Watershed, please contact Kari Wester at 707.569.1448 ext 101 or kwester@sonomarcd.org.