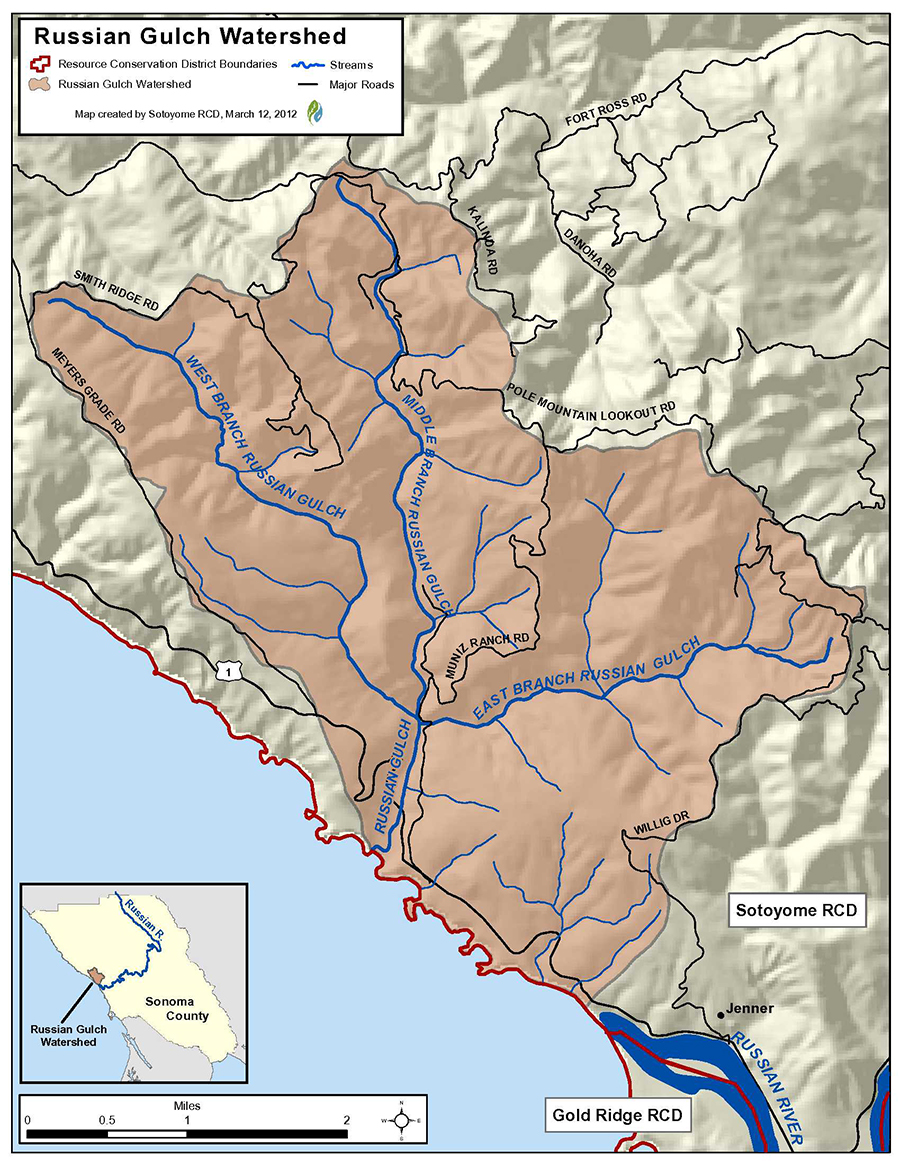 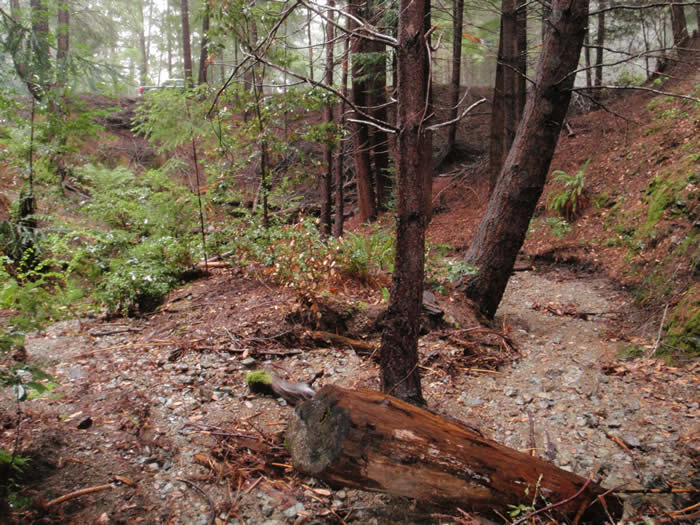 Approximately 26% of the watershed was acquired by Sonoma Land Trust in their Jenner headlands acquisition.  The bulk of the remaining watershed is privately owned and comprises the Muñiz Ranch rural subdivision.

Like most all of the surrounding area, Russian Gulch was heavily logged in the past. The steep terrain did not deter the timber industry from extracting the straight and tall redwood and fir trees from the deep valleys of the Russian Gulch tributaries.

These days a small amount of timber extraction is still active in Russian Gulch and some cattle grazing occurs in the lower reaches. Rural development within the Muñiz Ranch is the dominant activity in the area.

The predominant vegetation throughout the area consists of Douglas fir, redwood, maple, and alder in the upper watersheds which open up to willow, bay laurel and grassland in the lower reaches.

Among the endangered species are the Oncorhynchus kisutch, coho salmon. Threatened species that have been documented in the watershed include the Rana draytonii, CA red-legged frog, the Oncorhynchus mykiss, the steelhead trout, and the Strix occidentalis caurina, northern spotted owl. Also, bank swallow (Riparia riparia (nesting)) and the red tree vole (Arborimus pomo) is listed with a federal status of species of concern in the DFG’s Natural Diversity Database. Habitat levels for each of these species vary throughout the Russian Gulch watershed. To improve habitat in the watersheds, recommendations include increasing riparian canopy, road repairs to reduce sediment delivery into stream, and increase instream habitat with structure installation and wood retention.

The history of logging in the Russian Gulch has left an abundance of legacy logging roads on the landscape. Many of these roads have been reoccupied by the residents of the Muniz Ranch or are used as vital access roads for the Jenner Headlands. There are many more, however, that are abandoned on the hillside with detrimental effect on the local hydrology. Many of these old logging roads were cut across steep and geologically unstable hillslopes in close proximity to streams and were not installed with proper drainage designs in mind. In the years since the time of heavy logging in the basin, these legacy roads continue to have detrimental effects on the hydrology of the area by diverting streams out of their natural channels and by eroding and contributing fine sediment to the waterways. The assessment and improvement of roads for sediment reduction is primary habitat restoration priority in the Russian Gulch watershed.

California Department of Fish and Game has been active with stream surveys in this drainage. These surveys monitor both stream conditions as well as look for species of fish and amphibians. Through these surveys, recommendations are made for actions to help improve habitat quality.

For more information about the Russian Gulch watershed, please contact Kevin Cullinen at 707.569.1448 ext 103 or kcullinen@sonomarcd.org.