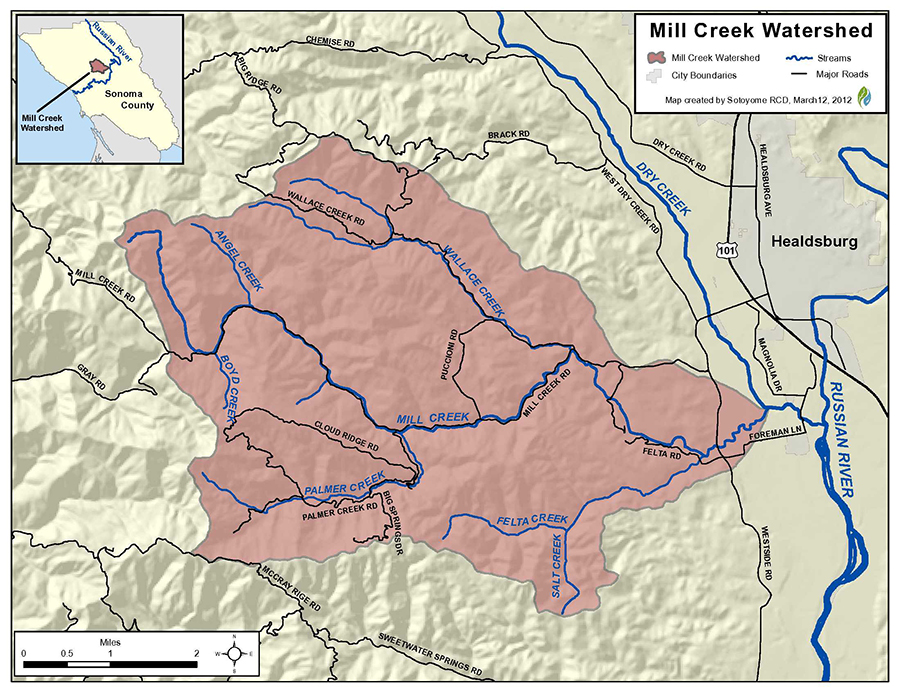 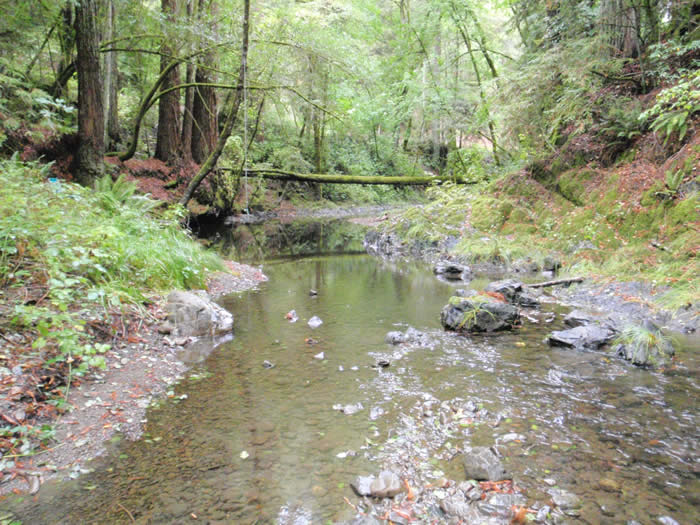 The Mill Creek Watershed is an important and picturesque watershed within the Russian River basin. With its lower reaches located only 3 miles west of Healdsburg, Mill Creek is a beautiful home for many rural residents that have excellent access to the conveniences of a vibrant Sonoma County city. Located close to the heart of the famous Sonoma County wine country, it is a diverse watershed in both geography and landuse.

The Mill Creek watershed drains an area of approximately 24 square miles and is composed of 3 primary sub basins: Palmer Creek, Wallace Creek, and Felta Creek. The topography of the watershed is quite dramatic, with elevations ranging from over 1,500 ft in the headwaters to approximately 60 ft in the Dry Creek Valley. The creek flows primarily west to east through steep wooded canyons to the flats and agricultural lands at its confluence. Mill Creek and its tributaries comprise 29 miles of blue-line stream within the watershed

Initial settlements in the watershed consisted of prehistoric villages on the lowland areas along the Dry Creek alluvial plain and along Mill Creek. These early inhabitants were Southern Pomo Indians who cultivated the land in their traditional ways through burning, tilling, sowing and pruning native plants.  American and European settlers began arriving in the early 1800s.  By 1841, the area was included within the 49,000 acre Mexican land grant deeded to Henry Fitch termed Rancho Sotoyome, named after the local tribe whose chief was referred to as Chief Soto. Rancho activity from 1840 to 1850 introduced livestock grazing, and farming for crops and feed. Fruit crops and grape vines were also introduced at this time. As settlement increased in the area, the need for a sawmill and flour mill was apparent and in 1850 the first sawmill to operate in northern Sonoma County was erected in Mill Creek. The original site was located near the “Upper Falls” on Mill Creek and later moved to a point just below the second falls and continued operating until 1881. This logging period lasted for several years. Redwood logs supplied beams for construction and the developing railroad and tanbark was sent to a Santa Rosa tannery.

In the flatter areas of the watershed, the forests were often cleared and converted to prune orchards, vineyards and grassy openings for livestock grazing. In the 1920s, the name Venado was given to identify the settlement in Mill Creek and a post office was erected. Quite a few of the early settlers were former engineers who bought 40-acre plots of land from the original land owner. A crushed stone quarry was mined in the early 1900s for building blocks and cobblestones. (Historical information from healdsburgmuseum.org)

Over time, wine grape growing continued to expand throughout the Dry Creek Valley, and since the time of prohibition in the 1920s, it has emerged as the predominant land use in the area and is recognized as world class grape growing and wine producing region.

Today, the Mill Creek watershed is completely privately owned. Most of the parcels are less than 600 acres in size. In the lower elevations where Mill Creek meets up with Dry Creek, land use is primarily made up of vineyards and wineries. Going up the watershed, the valley narrows and the steep forest-covered hills limit the amount of agriculture that can take place. Many of the landowners pursue a diverse mixture of land uses that includes residential dwellings, winegrape growing, vegetable farming, fruit production, livestock production and in some cases small wineries that are open to the public.

Vegetation in the Mill Creek watershed is typical of the North Coast Mediterranean vegetation types. Where temperatures are relatively high and precipitation and soils are shallow, oak woodlands and chaparral-associated plants predominate. In the cooler and wetter areas, soils are deeper, and mixed evergreen forest and oak woodland communities occur. Redwood and Douglas fir dominate in cooler, moister areas, whereas hardwood evergreens, such as tan oak, madrone, live oak, and bay occur on well-drained slopes. On southern exposures and the edges of the mixed forest can be seen the northern oak woodland type. Oregon and black oak and Manzanita dominate here, while coniferous trees are scarce. Much of the grassland in the watershed has developed on land cleared of hardwoods and conifers for grazing. Numerous types of grasses, both exotic and native cover these open areas. The riparian vegetation along creeks include: cottonwood, willow, valley oak, live oak and alder with some areas supporting buckeye, poison oak and toyon.

Several listed species are found within the Mill Creek watershed. Among the endangered species are the Oncorhynchus kisutch, coho salmon, and the Syncaris pacifica, the CA freshwater shrimp. Threatened species that have been documented in the watershed include the Rana draytonii, CA red-legged frog, the Oncorhynchus mykiss, the steelhead trout, and the Strix occidentalis caurina, northern spotted owl. Habitat levels for each of these species vary throughout the Mill Creek watershed. To improve habitat in the watershed, recommendations include increasing riparian canopy, road repairs to reduce sediment delivery into stream, and increase instream habitat with structure installation and wood retention.

The history of logging in the Mill Creek watershed has left a lasting impression on the landscape. One of the primary impressions comes in the form of legacy logging roads. With the invention of tractor logging in the 1950’s it became popular practice to cut small roads into where logging was taking place and use these roads to drag, or skid, the logs to a broad landing areas. From these landings, logs could be loaded onto trucks and taken out on much larger roads to local mill sites. Many of these roads were cut across steep and geologically unstable hillslopes in close proximity to streams and were not installed with proper drainage designs in mind. In the years since the time of heavy logging in the Mill Creek watershed, these legacy roads continue to have detrimental effects on the hydrology of the area by diverting streams out of their natural channels and by eroding and contributing fish-choking fine sediment to the waterways.

For more information about the Mill Creek Watershed please contact Aaron Fairbrook at 707.569.1448 ext 106 or afairbrook@sonomarcd.org.