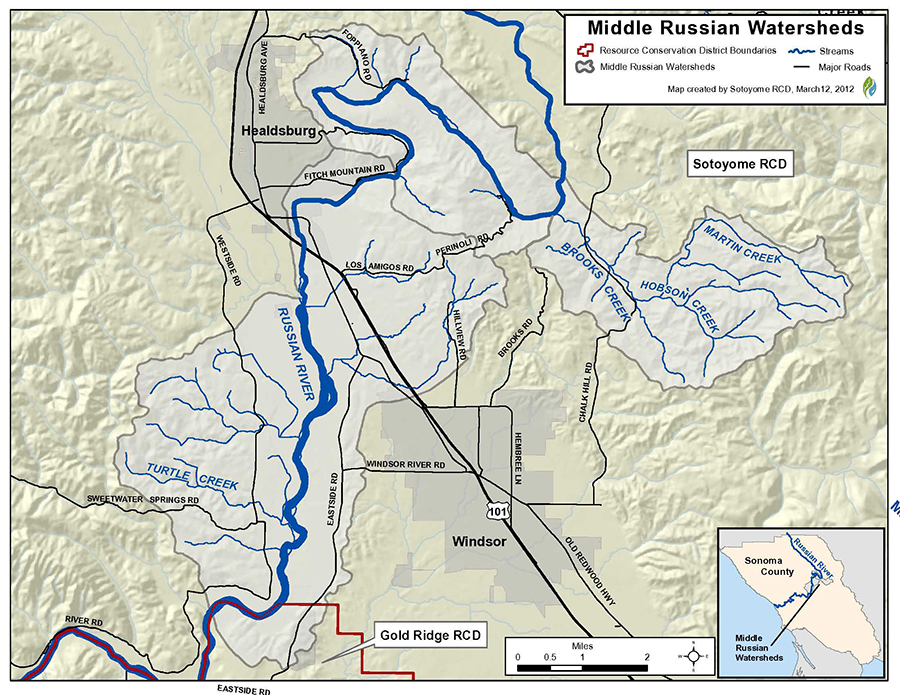 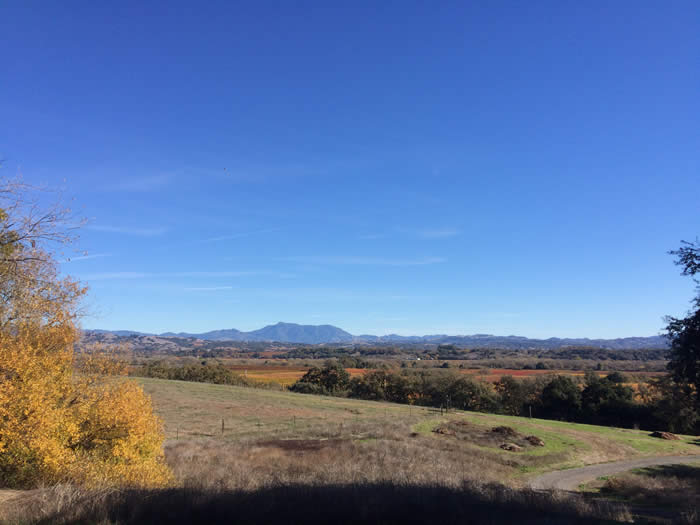 The Middle Russian Watershed consists of a number of smaller unnamed subbasins between Healdsburg and Riverfront Park just north of Forestville.  The largest subbasin in this reach is the Brooks Creek watershed just south of the Maacama Creek Watershed.  Brooks Creek is a fourth order stream and has approximately 3.77 miles of solid blue line stream. Brooks Creek drains a watershed of approximately 8.11 square miles. Elevations range from about 125 feet at the mouth of the creek to 1,529 feet in the headwater areas.

Turtle creek is a smaller stream system, unnamed on the USGS quadrangle map,  which is also known as Griffin Creek or Bishop’s Ranch Creek, located near Sweetwater Springs Rd and Westside Rd. Turtle Creek is a first order intermittent stream and has approximately 3.5 miles of blue line stream. The creek drains a watershed of approximately 3.7 square miles. Elevations range from about 60 feet at the mouth of the creek to 600 feet in the headwater areas. The headwaters are located in a steep, narrow canyon that widens into a narrow valley and the creek drains from 3 lakes of approximately 1 acre in size. The first ½ mile of the stream was channelized during past gravel mining operations along the mainstem.

A minor unnamed tributary (commonly referred to as Keepo Creek) provides cooler temperatures through subsurface spring fed flow in the lower watershed. No suitable spawning or rearing habitat exists currently in Keepo Creek. However, a steelhead trout was observed in Turtle Creek by a red during the CA Dept of Fish and Game’s 1995 survey.

The mid and lower portions of the Brooks creek watershed have mixed conifer/hardwood zones as well as agricultural zones. The lower riparian zone is dominated by willow and bay laurel. Oak woodland forest dominates the watershed overall, as well as the upper riparian zones, but there are zones of grassland through. In turtle creek Vegetation in the upper watershed includes redwood, maple, alder, bay and oak, with willows, ash and cottonwood in the lower drainage area.

An assessment of Brooks Creek completed by the Department of Fish and Game in 2001 indicated salmonids present in several pools throughout the length of Brooks Creek that was surveyed. However, the biological inventory results in the report do not tally any salmonids identified. In the past, adult steelhead (Oncorhynchus mykiss) were commonly seen throughout Turtle Creek, and coho salmon (Oncorhynchus kisutch) occasionally, according to landowners.

For more information about the Middle Russian Watershed please contact Aaron Fairbrook at 707.569.1448 ext 106 or afairbrook@sonomarcd.org.