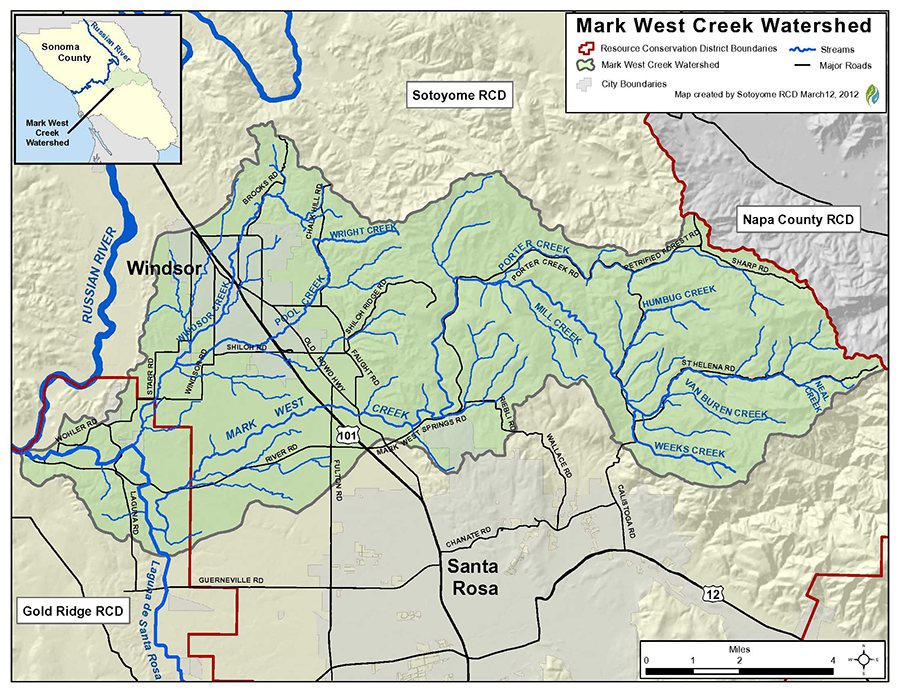 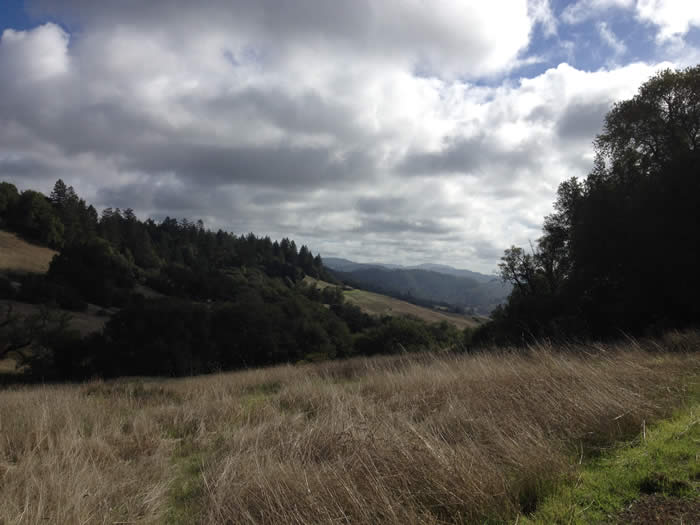 The watershed ranges in elevations from about 40 feet at the confluence with the Laguna de Santa Rosa to 2,240 feet in the headwaters in the Mayacamas Mountain Range. Although it’s not an official designation, the RCD breaks Mark West into upper and lower watershed areas roughly at the Mark West Spring Lodge, along Porter Creek Road. Here in the watershed, there is a change in the geology, hydrology, degree of urbanization, and ecology.

The lower part of the watershed is highly urbanized and contains the areas of Larkfield-Wikiup and the Riebli-Wallace Neighborhood east of Highway One. West of Highway One, the landscape is defined by a dominance of vineyards and other agricultural lands with no other large urban centers. River Road essentially runs through the center of the watershed all the way to the Russian River.

The upper part of the watershed is characterized by rural residential properties with about 5-7% of the area composed of small scattered vineyards or other agricultural uses. The two main points of access are Mark West Springs Road which turns into Porter Creek Road and Saint Helena Road. Both routes connect to Calistoga Road which continues to Napa County. The upper watershed is mountainous with curvy roads that cut through a mosaic of vegetation types. The total watershed is about 94% privately owned.

The upper watershed includes a small area of Bothe Napa Valley State Park which is owned by the State of California and can be accessed by the public from Highway 128 in Napa County. In addition, there are multiple properties owned by the Sonoma County Agricultural Preservation and Open Space District including the Saddle Mountain Preserve and the Cresta and McCullough Ranch which may in the future be transferred over to Sonoma County Regional Parks. There are other lands with recreational and educational opportunities through the Pepperwood Preserve, Rancho Mark West, Safari West, a wildlife preserve showcasing African animals, and the Mayacamas Golf Club.

During the late 19th and early 20th centuries, land uses in the Upper Mark West watershed were largely focused around ranching and timber harvest. These land uses are still in place today, though to a lesser degree. Within the lower portion of the watershed, land use was focused on farming row crops, hops, and prune and apple orchards.

Vegetation is very diverse between the low lying areas west of Highway 1 and to the headwaters in the Mayacamas Range. The upper areas of the watershed are composed of rolling non-native and native grasslands that integrate with coniferous forest, oak woodland and chaparral habitat. Within the lower portion of the watershed, the dominant plant community is riparian habitat associated with Mark West Creek that is generally confined by rural or residential properties and agriculture.

Coho Salmon (Oncorhynchus kisutch) and steelhead (Oncorhynchus mykiss) are present in Upper Mark West Creek and its tributaries. Wild Coho Salmon were observed in 2001 by DFG during a snorkel survey and most recently in the fall of 2011 by UC Cooperative Extension (UCCE) and DFG during multiple surveys. Now, more than ever, this watershed is a focus to improve and enhance fisheries habitat. The fall of 2011 was the first year that the Russian River Coho Salmon Captive Brood Stock Program released hatchery salmon in to the Mark West Watershed. In addition to salmonids, Rana draytonii (CA red-legged frog) and Rana boylii (yellow- legged frog) which are both listed as threatened have been documented in the watershed.

The RCD has worked with many agricultural producers in the Mark West Watershed to enhance their farming operations and protect soil and water resources. Projects include the development of LandSmart Plans, implementation of frost protection alternatives, enhancement of riparian areas, erosion control, and hedgerow plantings. landsmart.org.

The RCD is continuing to work throughout both watersheds with interested landowners to address resource management concerns. The goal is to investigate and evaluate current and historic conditions and recommend a prioritized set of actions and programs to improve water quality and riparian and aquatic habitat conditions in the watersheds.

For more information about the Mark West Watershed please contact Kevin Cullinene at 707.569.1448 ext 103 or kcullinen@sonomarcd.org.