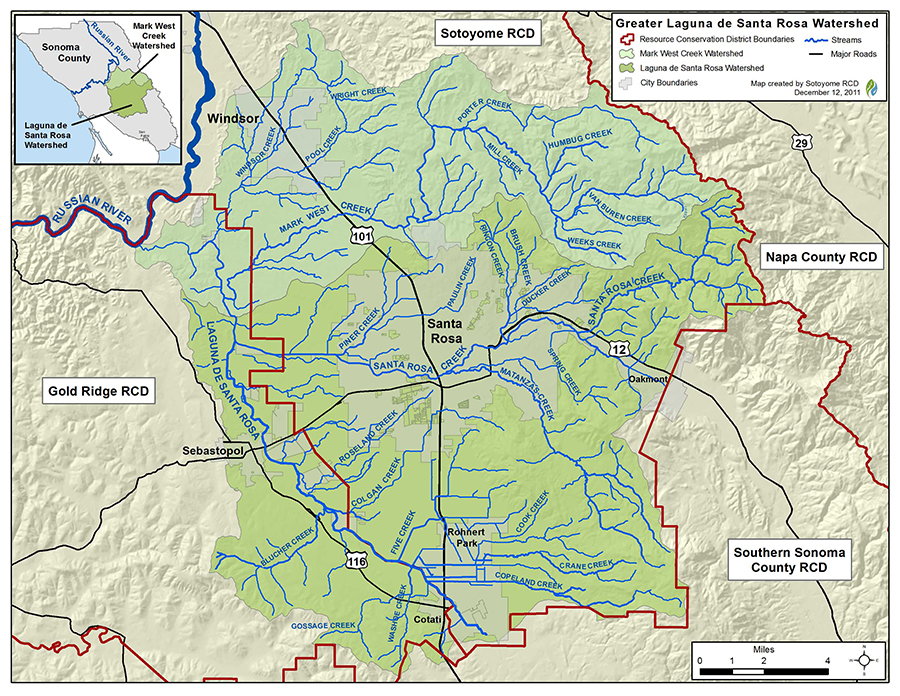 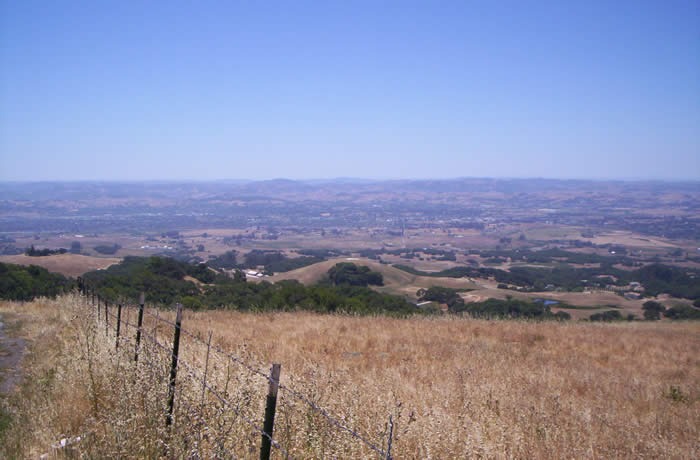 The Laguna de Santa Rosa (Laguna) watershed is an ecologically and economically important area of Northern California. In addition to having the largest freshwater wetlands complex on the northern California coast, the Laguna is also the home to a diverse assemblage of over 200 species, including several state and federally endangered plants and animals, and has recently been recognized as a Wetland of International Importance by the Ramsar Convention on Wetlands. The Laguna is the largest tributary of the Russian River, draining approximately 254 square miles through approximately 435 stream miles. The watershed contains a diversity of habitat including creeks, open water, perennial marshes, seasonal wetlands, riparian forests, oak woodlands, and grasslands.

The Laguna is home to the City of Santa Rosa, the largest city in California’s North Coast Region, and the 12th largest metropolitan area in California. Though the watershed makes up only 16% of Sonoma County’s land mass, it is home to over half the county’s population, containing all or part of the cities of Windsor, Santa Rosa, Rohnert Park, Cotati, Sebastopol, and the community of Forestville. In addition to these urban areas, the Laguna watershed contains over 70 square miles (over one quarter of the watershed’s area) of important farmland, as designated by the California Department of Conservation.

Due to its long history of settlement, particularly in the last two hundred fifty years, the Laguna has experienced significant changes to its hydrology, geomorphology, flora, and fauna, especially in areas of intensive land use.

History and Land Use

The Laguna de Santa Rosa once consisted of vast oak woodlands, riparian forests, lakes and perennial and seasonal freshwater wetlands.  Herds of elk and pronghorn antelope were numerous, as well as mountain lions and the grizzly bears that inspired our state flag.  The Laguna also supported many different species of birds, including the now extinct Yellow-Billed Cuckoo.

Native American remains in the Laguna have been dated as far back as 10,000 years ago. As nomadic hunter gatherers, the indigenous peoples of the Laguna which included the Pomo, Wappo, and Miwok, lived off of acorns, roots, seeds, berries, fish, waterfowl, and a variety of game animals. They used native vegetation like tule to make rope, shelter, and canoes, while using other plants for food, clothing, dyes and medicine.

In 1833, the first Mexican land grant was established which initiated the beginning of ranching and farming in the area.  Settlers in the late 1800s were encouraged by the state to “reclaim” the farmable land that lay under the Laguna’s marshes, lakes, and wetlands.  In the decades that followed, early settlers began draining and filling wetlands and clearing oak woodlands to make way for grain, row crops, hops, and orchards.  Hunters were also very active at this time in the wildlife-rich Laguna as the demand for food increased from a rapidly growing San Francisco.  A lack of hunting limit laws during this period led to massive over hunting in the Laguna (in 1892, a single market hunter killed 6,200 ducks).
Agricultural use of the land intensified during the 1900s, as did residential and commercial development in the upper watershed. In the 1960s and 70s, miles of the Laguna were channelized for flood control and much of the riparian vegetation was removed. By 1990, 92% of the Laguna’s riparian forest was gone.

While the Laguna de Santa Rosa hydrology and floodplain has changed dramatically from the past, flooding is still a common occurrence in the area.  The Sonoma County Water Agency plays a large role in water resource and flood management .  The agency is also leading the development of a Groundwater Management Plan and projects designed to recharge the groundwater aquifer using floodwaters.  Sotoyome is a member of both the Santa Rosa Plain Groundwater Advisory Panel and the Technical Advisory Group.

The North Coast Water Quality Control Board is responsible for the implementing the  Clean Water Act in the Laguna watershed.  A Total Maximum Daily Load will be developed and implemented for the Laguna. The watershed is listed as impaired for sediment, temperature, nitrogen, phosphorus, dissolved oxygen, and mercury. Sources that contribute to these impairments include municipal wastewater discharge, stormwater runoff from urban areas, runoff and erosion from agricultural areas, atmospheric deposition, groundwater input, septic effluents, internal nutrient cycling and sediment fluxes, and dry weather storm drain flows (Sloop,et al. 2007). Laguna TMDL website can be found at: www.swrcb.ca.gov/northcoast/

Links to Important Organizations and Programs in the Watershed