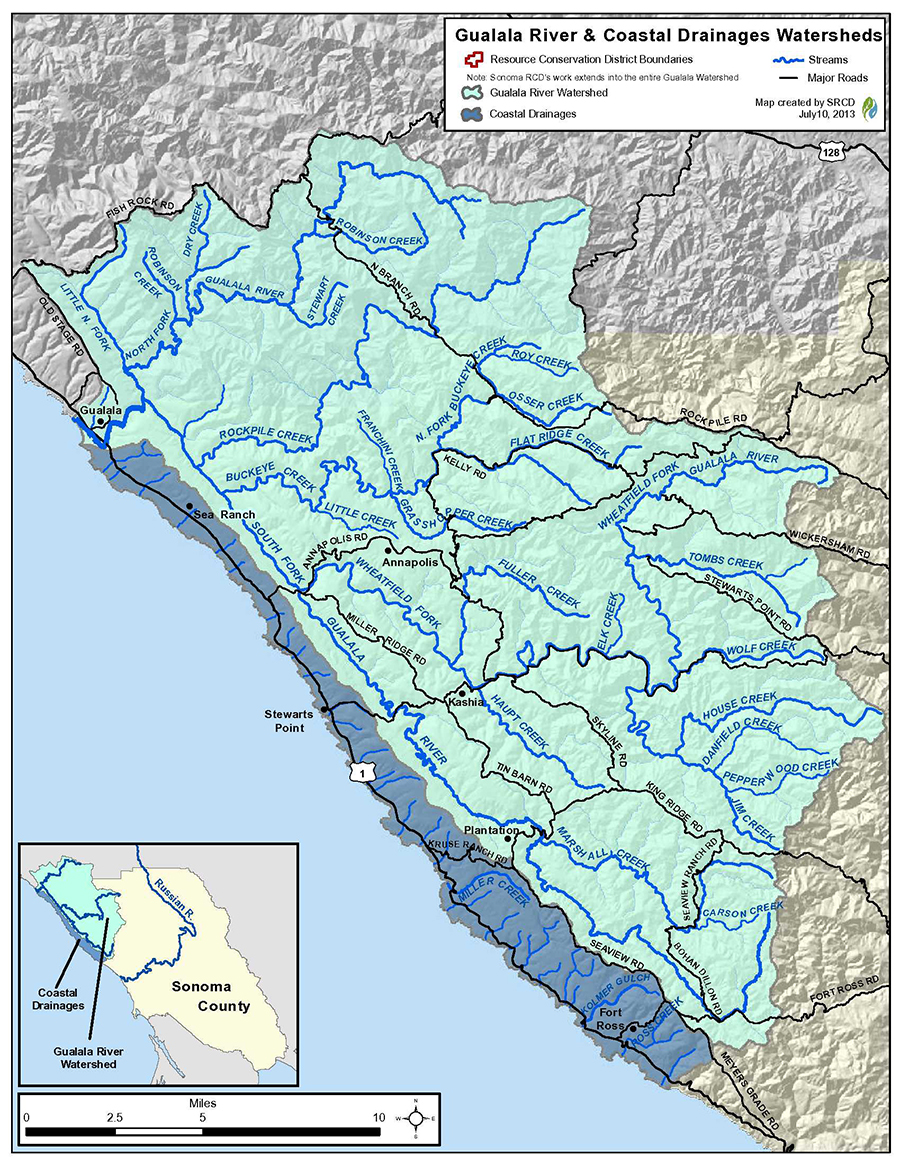 The Gualala River Watershed is located in the northwestern portion of Sonoma County and a small portion of Mendocino County. It drains an area of nearly 300 square miles through its vast network of streams before discharging into the Pacific Ocean near the town of Gualala. The Gualala River Watershed is a crucial coastal watershed for recovery efforts of the federally listed coho salmon.

This watershed’s unique elongated shape can be explained by the movement of the San Andreas fault which runs north-south through the watershed creating long linear reaches like the South Fork, which have little sinuosity. The Tombs Creek fault zone plays a more dominant role in shaping the eastern portions of the watershed which have a deflected look, influencing the headwaters of the North Fork, Rockpile Creek, Buckeye Creek and the Wheatfield Fork. The elevation in the Gualala River Watershed ranges from sea level at the Mouth of the Gualala River to 2,602 feet at Gube Mountain.

Land Use (Historic and Current):

The watershed has been subject to three eras of active land use:

Extensive logging and road building practices have contributed to erosion and mass wasting, producing a legacy of increased sediment loads severely impacting aquatic habitat in the Gualala River and its tributaries. Harvesting of coastal redwood and Douglas fir actively occurs today, but with substantially improved practices. Other common current land uses include grazing, vineyards and rural residency. 95% of the Gualala watershed is privately owned.

The watershed is characterized by mountainous rugged terrain covered by Coastal Redwood and Douglas fir forests in the northwestern, southwestern, and central portions of the watershed that are used extensively for timber. The interior consists largely of grasslands with scattered oaks.

The federally endangered Coho salmon (Oncorhynchus kisutch) were once present throughout four of the five subbasins of the Gualala River Watershed, but their populations significantly declined during the intense logging activities of the mid 20th century. Today, wild coho salmon have only been observed in the North Fork subbasin, but hatchery coho salmon have been planted in other areas of the watershed to aid in the recovery of the population. Although the Steelhead trout (Oncorhynchus mykiss) population did decline during that same time period, they can still be found today throughout the various streams of the Gualala River watershed.

The RCD can provide technical assistance to Gualala landowners and managers as well as direct landowners to other sources of educational, technical or financial assistance based on the natural resource concern. Past RCD projects are described below. Please contact us if you are interested in hearing more about how the RCD’s programs and services can support you.