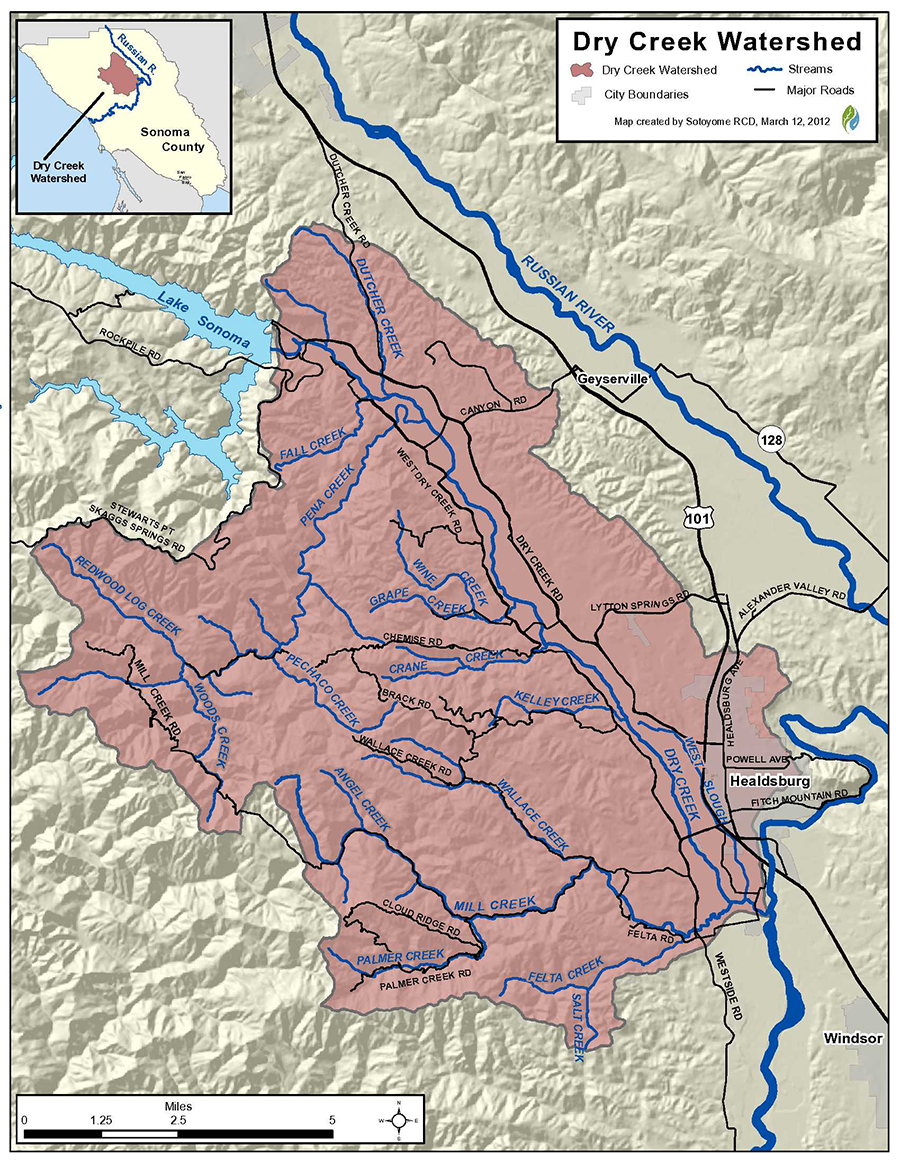 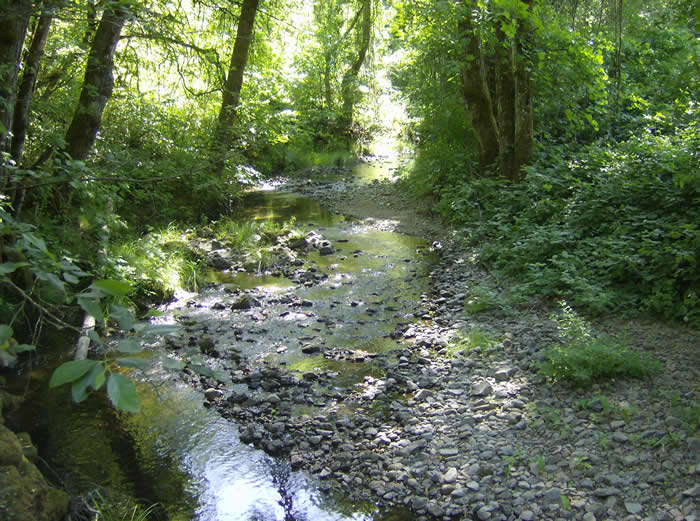 Dry Creek is a primary tributary to the middle Russian River, with headwaters in Mendocino County and the confluence below Healdsburg.  Dry Creek is a narrow valley about 16 miles long and only 2 miles wide and is home to two of California’s premier winegrowing appellations, Dry Creek Valley and Rockpile.  The Dry Creek watershed was permanently altered with the construction of Warm Springs dam and Lake Sonoma in 1983.  The lake serves as a flood control reservoir, the major water supply for irrigation and drinking water and as a recreational facility.  The dam causes sediment to be retained and has resulted in the Dry Creek channel becoming incised and entrenched relative to the tributaries. Major tributaries to Dry Creek include Mill Creek, Pena Creek, and West Slough.  The valley has one city, the City of Healdsburg which is the gateway to the more than 60 wineries in the valley.
Dry Creek climate is typical of north coastal California with dry warm to hot summers and mild winters with the majority of precipitation from January through April.

While Dry Creek has a history of Native American population, European settlement began in the mid 1850’s coincident with gold discovery in California.  Agricultural was established immediately in the fertile soils of the valley with zinfandel grape production as early as 1864.  There has been other crop production such as hops and fruits, with increased conversion to vineyards beginning in the 1970’s.  Other land uses include timber , grazing, gravel mining and rural residential land ownership.  The upper watershed is home to an 8,000 acre wildlife management area managed by the California Department of Fish and Game and the Army Corp of Engineers which operates the dam.  Beyond these public lands the rest of Dry Creek is predominately privately owned.

The vegetation in Dry Creek varies depending upon elevation, soil type and precipitation.  The lowlands along the valley generally has grassland and riparian willow species along the creek and the uplands are characterized by hardwood evergreens, oak woodland mixed with coniferous forest.  Much of the original redwood forest was logged in the late 1800’s, with second and third growth replacement at present.

Several listed species are found within the Dry Creek watershed. Among the endangered species are the Coho salmon, Steelhead and the CA freshwater shrimp. Threatened species that have been documented in the watershed include the CA red-legged frog, the steelhead trout, and the northern spotted owl. Dry Creek tributaries have some of the premier coho and steelhead spawning and rearing habitats in the Russian River, and Grape and Mill Creeks are the focus of the Russian River Keystone Initiative described under programs.

Links to Other Important Partner Programs in the Watershed:

Links to other important organizations in the watershed:

For more information about the Austin Creek Watershed, please contact Aaron Fairbrook at 707.569.1448 ext 106 or afairbrook@sonomarcd.org.