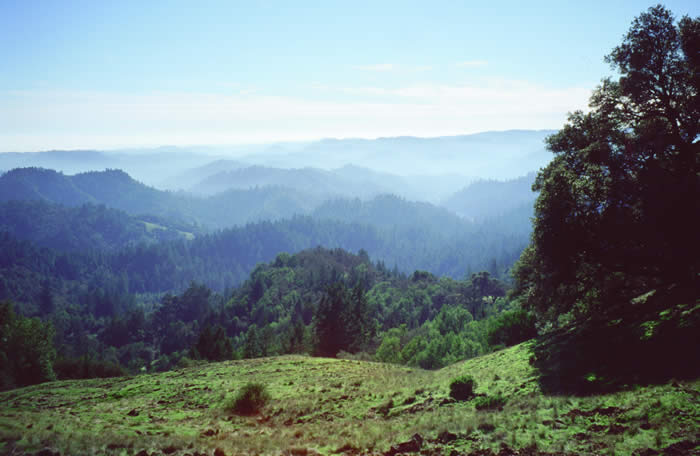 The Austin Creek watershed drains approximately 68.7 (110 km) square miles of land, and includes approximately 175 miles (281 km) of blue line stream. The watershed is made up of two major drainage basins. The main drainage basin is Big Austin Creek, and its primary tributary creeks include: Ward, Bearpen, Kidd, and St Elmo Creeks. The main basin covers 37.9 miles (60.9 km). The other major drainage basin is East Austin Creek, which meets Big Austin Creek near the center of the entire Austin Creek watershed. Its primary tributary creeks are Grey, Gilliam, Schoolhouse, Devil, and Sulphur Creeks. The East Austin Creek drainage basin covers 32.0 miles (51.5 km). The Austin Creek watershed is dominated by steep mountains. Elevations range from near sea level at the confluence with the Russian River to about 2320 feet on Mohrardt Ridge, which is the divide between Ward Creek, Bearpen Creek, and the Gualala River watershed. Big Austin Creek is a 16.0-mile-long (25.7 km) southward-flowing stream in the mountains of western Sonoma County, California, and empties into the Russian River about 4 miles (6.0 km) from the Pacific Ocean. The creek originates in an isolated area about 13 miles (21 km) west of Healdsburg, California. It flows south into wooded canyons, where it joins King Ridge Road just above its confluence with Bearpen Creek. It parallels King Ridge Road along the town of Cazadero and continues south through confluences with East Austin Creek and Kidd Creek. It flows under State Route 116 at milepost 4.93 and enters the Russian River about 1 mile (1.6 km) upstream of the town of Duncans Mills. There are no incorporated cities within the boundary, and the watershed is about 90% privately owned with about 10% held by state entities.  In addition to private property owners and state-owned property, there are properties held by the Sonoma Land Trust in the Austin Creek watershed.

Today major land uses in the Austin Creek watershed include timber harvest, quarrying, gravel mining, recreation, grazing, and rural development. Rural development is concentrated along Big Austin Creek and in the Cazadero area. All residential units are on septic systems and wells and many have private dirt roads. Historic land uses in the watershed included much heavier logging as well as magnetite mining (Russian River Basin Fisheries Restoration Plan, CDFG 2002). In the 1800s, the North Pacific Coast Railroad extended its narrow-gauge line up Austin Creek to transport lumber from Cazadero to the south. The railroad grade was later converted to road, becoming Cazadero Highway. Sonoma Magnesite Company was formed in 1912 to mine magnetite in the Austin Creek watershed. In 1914, an eleven-mile 2-foot-gauge industrial railway was built along the bank of East Austin Creek to connect the mine with “Magnesia” station on the North Pacific Coast Railroad south of Cazadero. Thirty tons of ore were processed daily in an oil-fired rotary kiln and packed into sacks for shipping. The mineral is important for steel-making and manufacture of bricks for high-temperature applications; but cost of transportation made mining impractical and production ended in 1920.
There are a total of 356 miles of roads in the Austin Creek watershed. Overall the ratio of miles of roads to square miles of watershed is high, with a ratio of 5. A ratio of <2 is recommended for a watershed to support anadromous fish (Meehan, 1991). Reasons given for the detrimental effects of roads include the fact that the slopes at which most roads are built tend to inhibit the natural dispersal of water thereby concentrating runoff and creating gullies and landslides. In addition, road networks have created drastic changes in the natural drainage patterns of the watershed through increasing the amount of impervious surfaces and diverting water to follow roads rather than natural patterns. Assessment and prioritization of excess sediment sources in the Austin Creek watershed is also ranked as a high priority in the CDFG’s Coho Salmon Recovery Tasks. At a Level D task, it means sediment reduction projects must be implemented rapidly or early in the coho salmon recovery process because it is critical to establish coho salmon rearing grounds.

Several listed species are found within the Austin Creek watershed. Among the endangered species are the Oncorhynchus kisutch, coho salmon, and the Syncaris pacifica, the CA freshwater shrimp. Threatened species that have been documented in the watershed include the Rana draytonii, CA red-legged frog, the Oncorhynchus mykiss, the steelhead trout, and the Strix occidentalis caurina, northern spotted owl. Habitat levels for each of these species vary throughout the Austin Creek watershed. To improve habitat in the watershed, recommendations include increasing riparian canopy, road repairs to reduce sediment delivery into stream, and increase instream habitat with structure installation and wood retention.

Links to Partner Programs in the Watershed

For more information about the Austin Creek Watershed, please contact Aaron Fairbrook at 707.569.1448 ext 106 or afairbrook@sonomarcd.org.